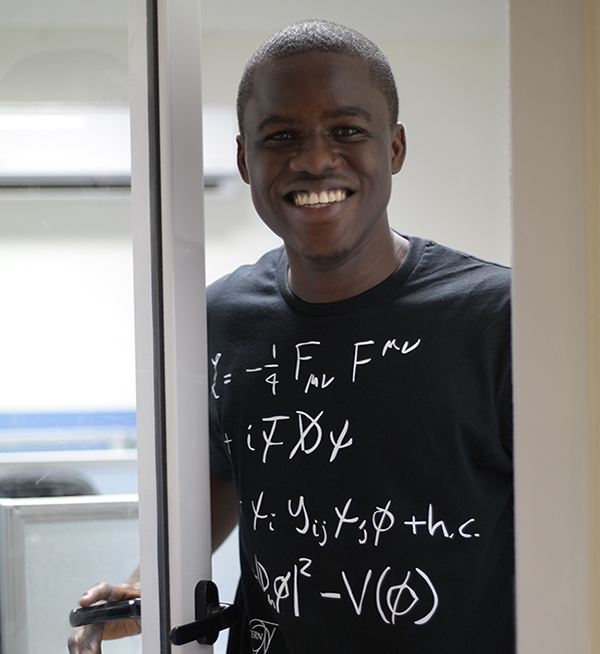 Frederick Senya holds a BSc Mathematics degree from the Kwame Nkrumah University of Science and Technology, Ghana, awarded in July 2015. For his mandatory one year National Service, he worked as a Teaching Assistant at the Department of Mathematics Education, University of Education, Winneba.

Frederick was enrolled in the 'Scientific Computing and Industrial Modelling' programme of the National Institute for Mathematical Sciences (NIMS), Ghana, in 2016. He believes his colleagues would describe him as a very personable, diversely talented, and result-oriented gentleman. He is interested in Finite Elements, Multivariate Data Analysis, Scientific Computing and Modelling using Differential Equations in the Transport sector.

After the completion of his programme, he intends to pursue further research in Scientific Computing and Industrial Modelling. It is his aim to also provide a special environment for the interaction of persons with varied scientific interests and backgrounds to facilitate the sharing of ideas, and contribute to the development of his country.

Commercial aquaculture is growing worldwide except in Africa where production is still low. With fisheries reaching a stagnating phase, the world and more so Africa will have to look to aquaculture in the future to provide fish products that will likely be needed. Tilapia is one of the most cultured fish in aquaculture and the main aim of fish farmers is to maximize yield. However, the growth of tilapia in terms of weight in aquaculture ponds can be affected by water quality parameters of the pond. In view of this, a mathematical model in a form of an ordinary differential equation was presented to predict tilapia weight due to various water quality parameters of the pond. The model incorporated four key parameters affecting tilapia growth: water temperature, dissolved Oxygen, biochemical oxygen demand and ammonia concentration. The model predicted tilapia weight within the period of one year. Model validation was done by use of growth data of tilapia cultured in a fish pond. Model results showed a good agreement between the simulated weight and measured weight with RMSE = 20.6g. Simulation results showed the effect of these water quality parameters on feed intake. Simulation results also showed the general effect of biochemical oxygen demand on fish weight when different range of values were used. Sensitivity analysis indicated that the growth model was most sensitive to biochemical oxygen demand and least sensitive to dissolved oxygen. Thus, the model presented in this study can be used to predict tilapia weight in fish ponds with different water quality measurements.